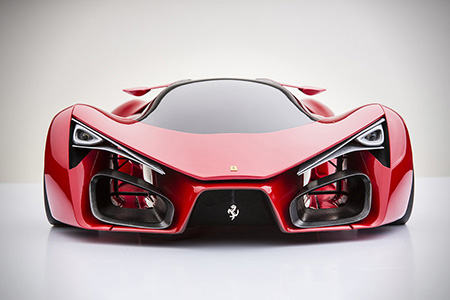 It’s only a matter of time before shops start creating F80 replicas – like this LaFerrari replica from China, but for those with more money than they know what to do with, here’s yet another toy to add to your shortlist. The Ferrari F80 boasts hybrid drivetrain that consists of KERS (Kinetic Energy Recovery System) paired with a twin-turbo V8 engine to generate 1,200 horsepower. It will purportedly weigh just 1763-pounds, enabling the hypercar to sprint to 62 mph in just a mere 2.2-seconds, topping out at 310mph. No word yet on pricing, but expect to shell out a minimum of $2.2-million (if you’re a preferred Ferrari customer) when it’s launched. Continue reading for more images and a special LaFerrari video.

Ferrari states that the car has a top speed exceeding 350 km/h (217 mph), and that it is capable of reaching 100 km/h (62 mph) in under three seconds, 200 km/h (124 mph) in under seven seconds, and a speed of 300 km/h (186 mph) in 15 seconds. Ferrari also claim that the car has lapped its Fiorano Test Circuit in under 1 minute and 20 seconds which is faster than any other road-legal car Ferrari has ever produced.

18 Strange (Yet Real) Things People Have Spotted in Russia

They May Look Like Regular LEGO Bricks, But You Can Actually Eat These