Photo credit: Athlones Wildlife Apiaries
Ruari O Leocháin, a school teacher from the town of Athlone, County Westmeath, Ireland, decided to make lockdown a bit more productive by combining two of his passions, LEGO and bees. This project was already on the back of his mind for quite some time, but acquiring a massive amount of LEGO bricks kept him away from starting it, that is until…everything shut down. Read more for a video and additional information.

After ordering the LEGO bricks, he spent eight weeks working on the project “bit-by-bit” without using any adhesives or a blueprint. Once completed, it was up to the bees themselves to take over and transforms the LEGO structure into a functional beehive. In the end, roughly 30,000 showed up and are living there now. 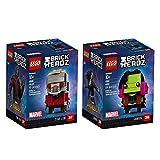 What the bees will do, given enough time, is they will propolize the whole thing. Propolis is a kind of glue that the bees get from trees, and with any gaps in a beehive, with any wind or air getting through, they will basically put their glue in between to seal it up. To be honest, I wasn’t expecting such a big reaction … I have had people getting in touch with me from China, America, and elsewhere saying that they love the idea,” said Leocháin.