This stunning image of Jupiter’s iconic Great Red Spot was pieced together using data from NASA’s Juno spacecraft. The true-color image offers a natural color rendition of what the Great Red Spot and what its surrounding areas would look like to human eyes from Juno’ position. The turbulent atmospheric zones in and around the Great Red Spot are clearly visible. It was captured on July 10, 2017 at 7:10pm PDT , as the Juno spacecraft performed its seventh close flyby of Jupiter. Continue reading for more incredible Jupiter photos captured by Juno. 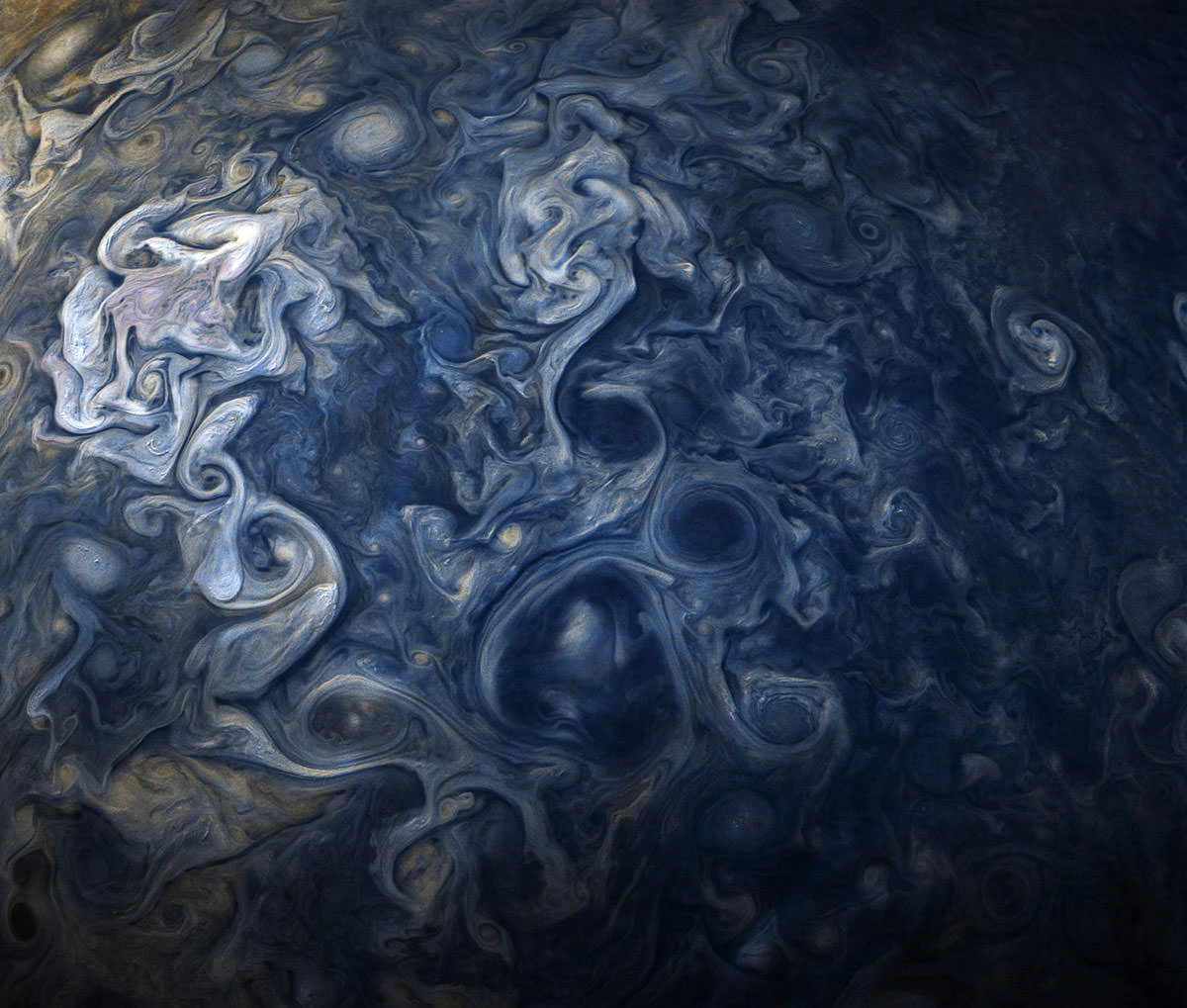 NASA’s Juno spacecraft captured this image when it was a mere 11,747-miles from the cloud tops, roughly as far as the distance between New York City and Perth, Australia. This image shows a cloud system in Jupiter’s northern hemisphere, and because of the Juno-Jupiter-Sun angle when the spacecraft captured this image, the higher-altitude clouds can be seen casting shadows on their surroundings, making it look like a Van Gogh painting of sorts. 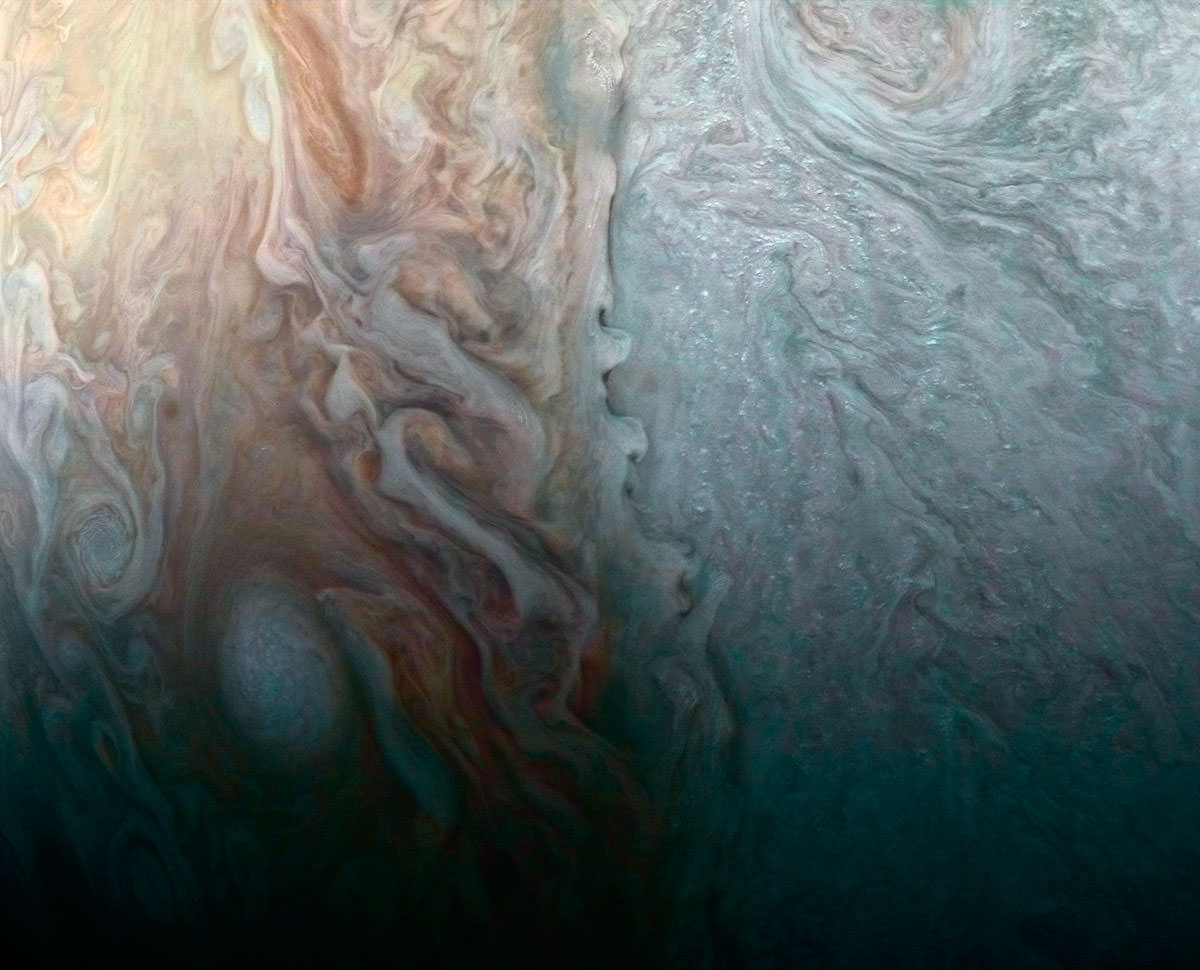 The image above highlights a feature on Jupiter where multiple atmospheric conditions appear to collide, called ‘STB Spectre.’ There are ghostly bluish streak across the right half of the image that depict a long-lived storm, one of the few structures perceptible in these whitened latitudes where the south temperate belt of Jupiter would normally be. The egg-shaped spot on the lower left is where incoming small dark spots make a hairpin turn. 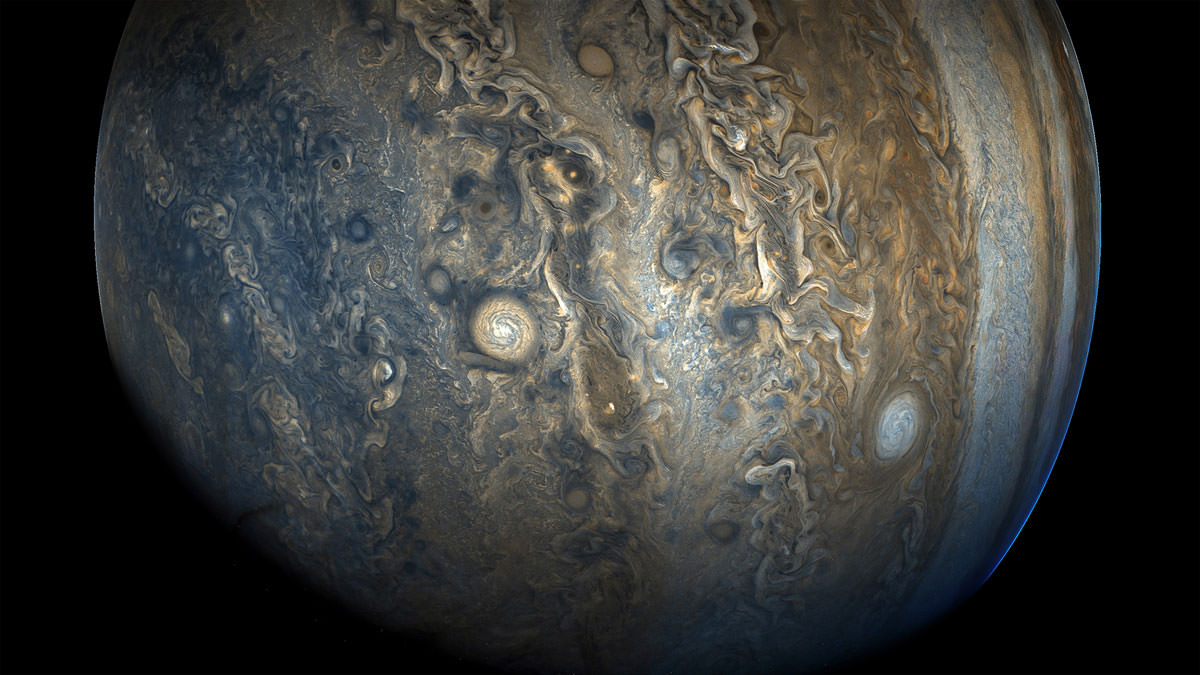 Jupiter’s southern hemisphere is captured in beautiful detail by NASA’s Juno spacecraft. You can see one of the white ovals in the ‘String of Pearls,’ or one of eight massive rotating storms at 40° south latitude on the gas giant planet. It was taken on Oct. 24, 2017 at 11:11 am PDT, as Juno performed its ninth close flyby of Jupiter sitting 20,577 miles from the tops of the clouds of the planet at a latitude of minus 52.96°. 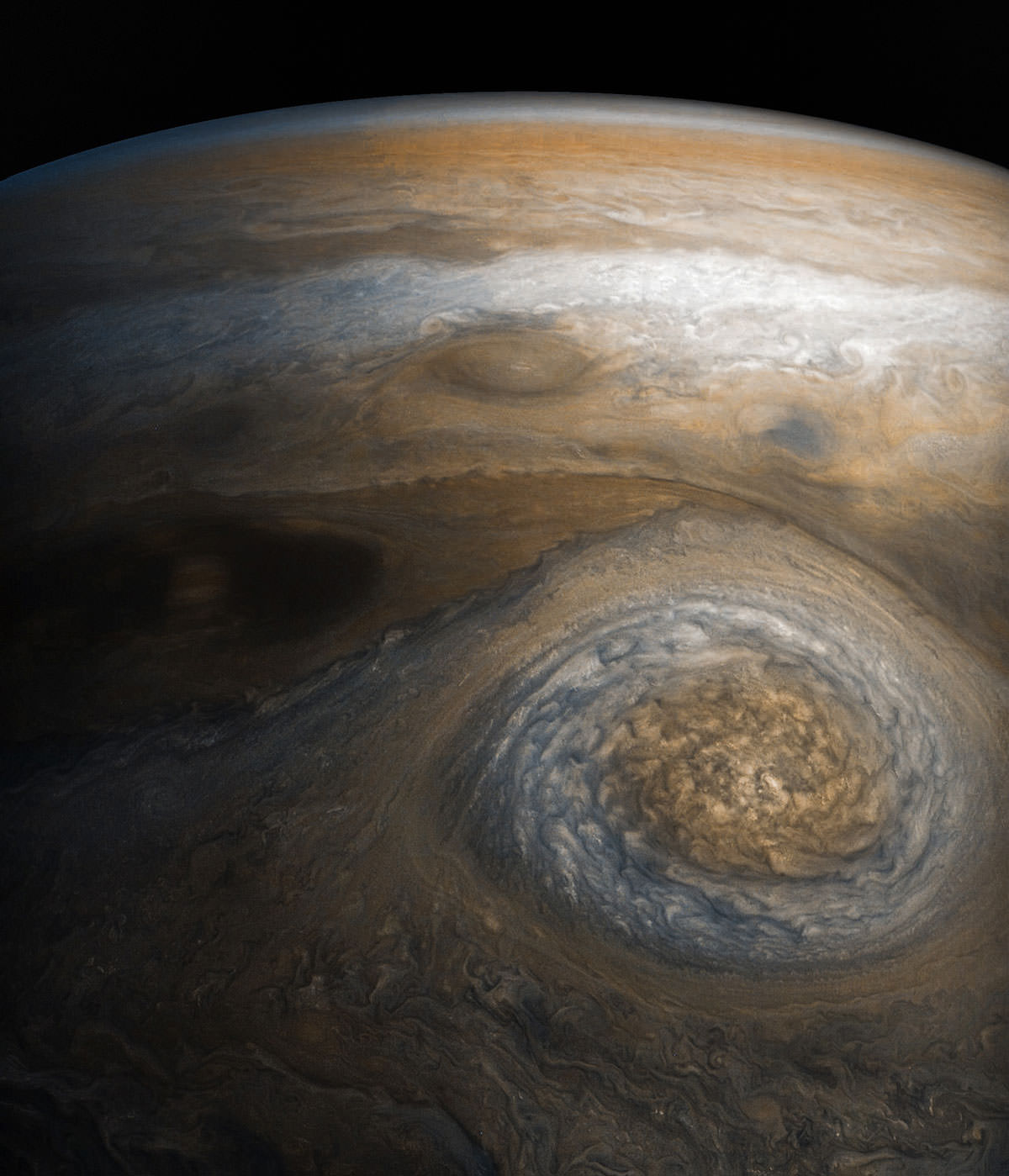 A dynamic storm was spotted at the southern edge of Jupiter’s northern polar region, dominating the Jovian cloudscape. This storm is a long-lived anticyclonic oval named North North Temperate Little Red Spot 1 (NN-LRS-1), which has been tracked since at least 1993, and may be older still. The image you see above has been rotated so that the top of the image is actually the equatorial regions while the bottom of the image is of the northern polar regions of the planet. 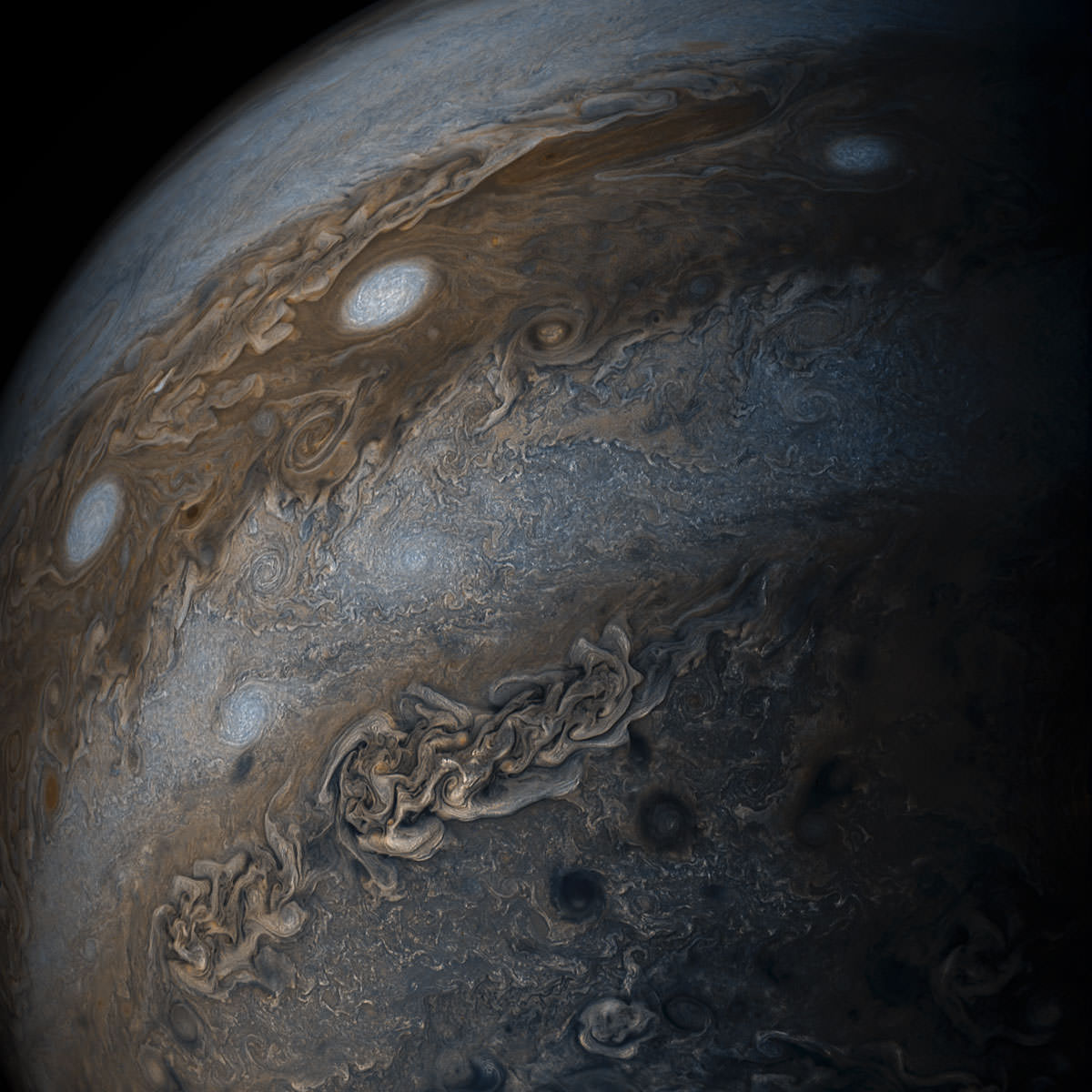 This amazing image of Jupiter’s bands of light and dark clouds was created by citizen scientists Gerald Eichstadt and Sean Doran using data from the JunoCam imager. Three of the white oval storms known as the ‘String of Pearls’ are visible near the top of the image. Each of the alternating light and dark atmospheric bands in this image is wider than Earth, and each rages around Jupiter at hundreds of miles per hour. The lighter areas are regions where gas is rising, and the darker bands are regions where gas is sinking. 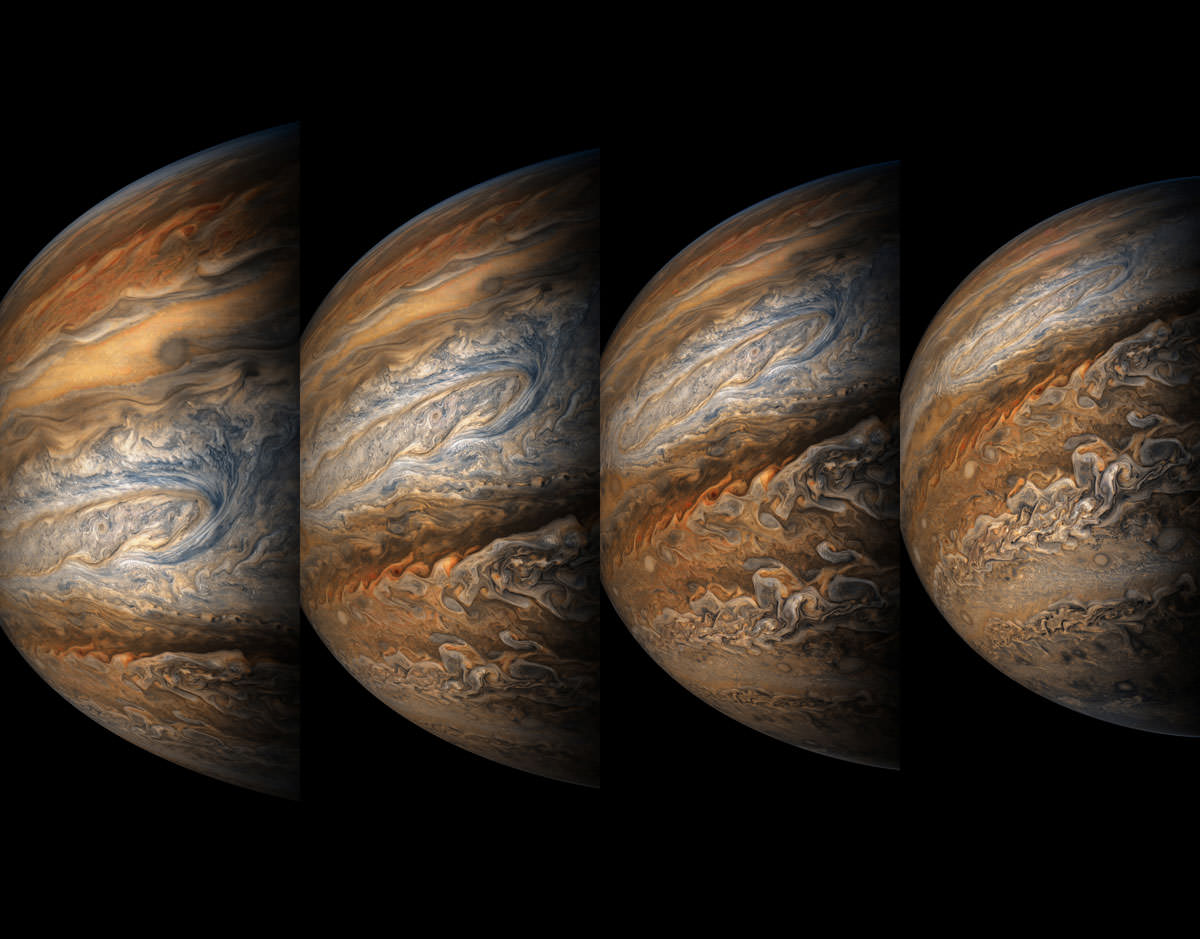 This series of enhanced-color images shows Jupiter up close and personal, as NASA’s Juno spacecraft performed its eighth flyby of the gas giant planet. From left to right, the sequence of images taken on Sept. 1, 2017 from 3:03 pm. to 3:11 pm. PDT. At the times the images were taken, the spacecraft ranged from approximately 7,545 to 14,234 miles from the tops of the clouds of the planet at a latitude range of -28.5406° to -44.4912°. 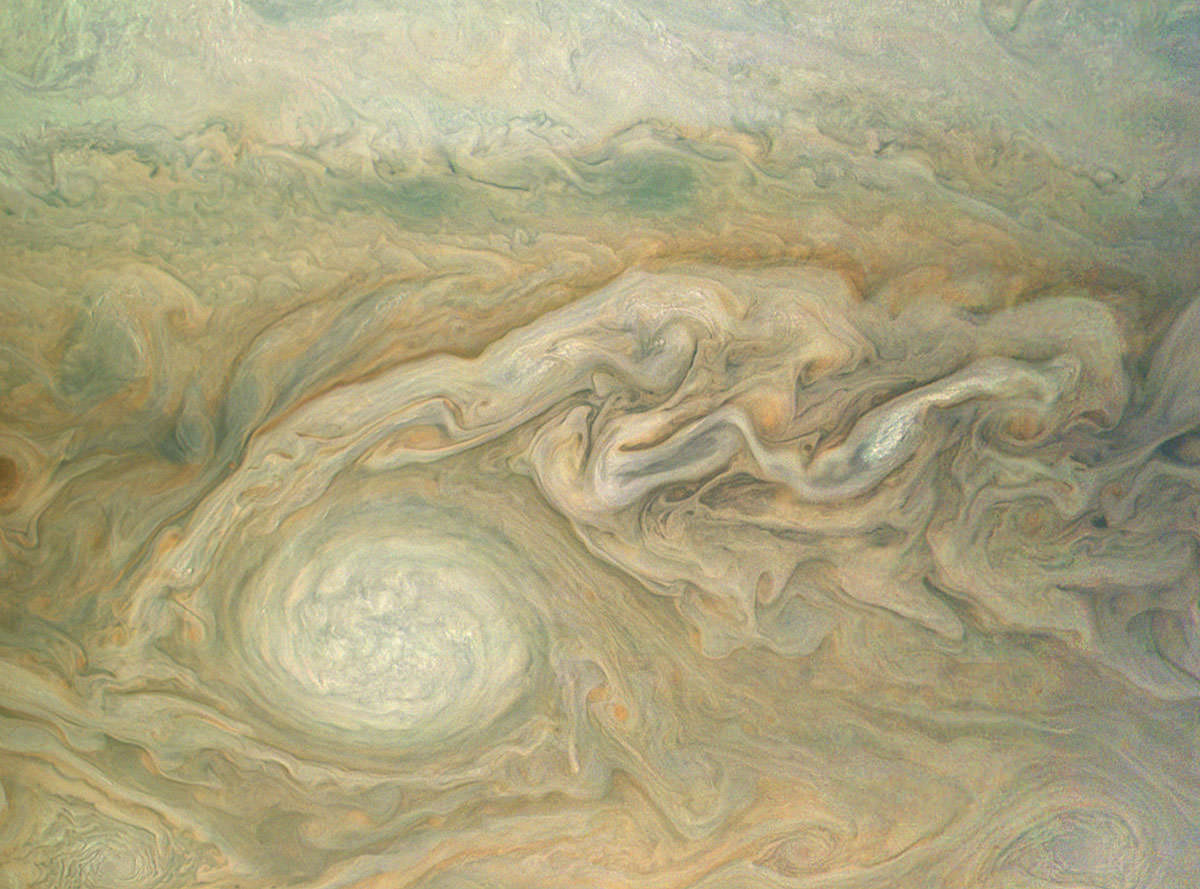 What you’re looking at is a massive, raging storm in Jupiter’s northern hemisphere that is rotating counter-clockwise with a wide range of cloud altitudes. The darker clouds are expected to be deeper in the atmosphere than the brightest clouds. Within some of the bright ‘arms’ of this storm, smaller clouds and banks of clouds can be seen, some of which are casting shadows to the right side of this picture (sunlight is coming from the left). The bright clouds and their shadows range from approximately 4-8 miles in both width and length. These appear similar to the small clouds in other bright regions Juno has detected and are expected to be updrafts of ammonia ice crystals possibly mixed with water ice.