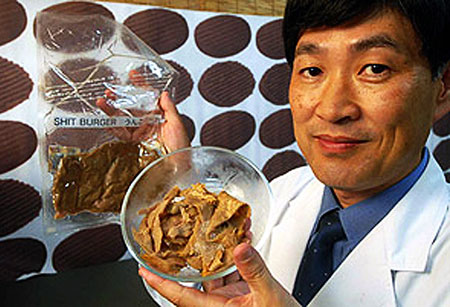 No, this isn’t a joke about the fictional turd burglar, but rather a real artificial meat made from human excrement, or sewage mud. It was invented by a researcher from the Okayama laboratory in Japan based on the discovery that “sewage mud is high in protein, because it’s full of bacteria, most of which comes from human feces.” Continue reading for the news report and more information.

In the meantime, Ikeda hopes to actually get his invention into mass production, by making it affordable. Right now, “shit meat” is actually 10 times more expensive than real meat, but once the price of the actual research is taken out of the equation, the Japanese scientist hopes his artificial meat will be able to compete with the natural one.

What Really Happens When You Throw Garbage Into a Volcano