Many already know that explosions are just so much cooler to watch in slow-motion, and that’s where Warped Perception comes in. He decided to experiment with a model rocket, fish tank, and high-speed camera. What happened next? An incredible show to say the least. The rocket engine can fire underwater since it makes its own oxygen. Read more for the video and additional information.

This precise mixture of chemicals means that a rocket engine will burn exactly the same anywhere, and yes, even in the vacuum of space. Unlike his previous experiment a few years back, in which the tank didn’t quite make it out unscathed, it was able to hold up this time. Previously, the weight of the water, along with the abrupt force of the rocket’s ejection charge proved too much. 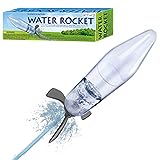