NASA’s Hubble Space Telescope has discovered a planet orbiting a distant star that may have lost its atmosphere but generated a second one through volcanic activity. Called GJ 1132 b and located 41 light-years from Earth, this planet was originally a gaseous world with a thick hydrogen blanket of atmosphere, but gradually lost its primordial hydrogen and helium atmosphere due to the intense radiation of the hot, young star it orbits. Read more for a video and additional information.

Its original atmosphere was absorbed into the planet’s molten magma mantle and is now being slowly released through volcanic processes to form a new atmosphere. What you see today is believed to be continually replenished to balance the hydrogen escaping into space. GJ 1132 b is located so closely to its red dwarf star that it completes an orbit around its host star once 1.5-days, thus keeping it tidally locked, showing the same face to its star at all times—just as our Moon keeps one hemisphere permanently facing Earth. 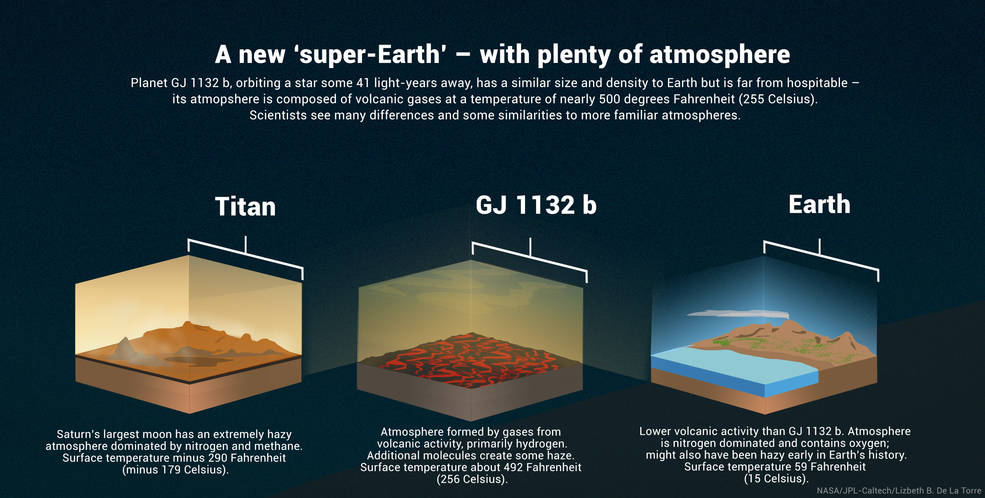 It’s super exciting because we believe the atmosphere that we see now was regenerated, so it could be a secondary atmosphere. We first thought that these highly irradiated planets could be pretty boring because we believed that they lost their atmospheres. But we looked at existing observations of this planet with Hubble and said, ‘Oh no, there is an atmosphere there’,” said study co-author Raissa Estrela of NASA’s Jet Propulsion Laboratory (JPL) in Pasadena, California.