Astronomers have stitched together the most detailed image yet of our evolving universe. The mosaic you see above consists of thousands of individual photographs taken by the Hubble Space Telescope, or more than a quarter of a million galaxies, which is 30 times more than previous “deep field” photos. “The galaxies are scattered across time, from 550 million years ago to 13 billion years ago. Their light is just arriving at Earth now, after crossing space for billions of years,” said Garth Illingworth, an astronomer at the University of California, Santa Cruz, and the leader of the team that created the image, to NBC News MACH. Read more for another image and additional information. 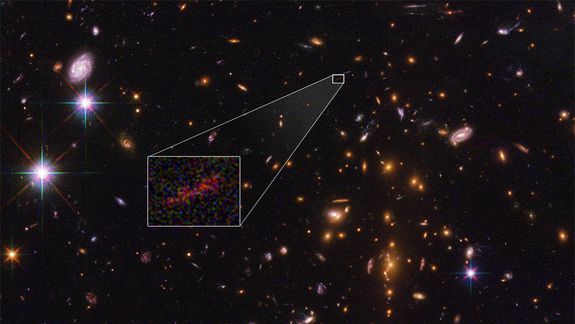 “At the very limits of Hubble’s viewing abilities lies a cluster of spiraling, disk-shaped galaxies, collectively called SPT0615. NASA posted an image of these ancient structures, one of which was born over 13 billion years ago, relatively soon after the Big Bang likely created the universe. Light left these faraway galaxies long ago, but Hubble can sleuth out this ancient luminosity,” reports Yahoo News.