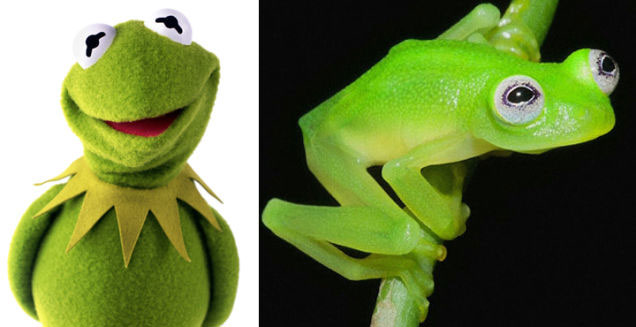 Researcher Brian Kubicki discovered a new species of glass frog that looks just like Kermit from The Muppets, complete with translucent skin so you can see its insides. Officially named Hyalinobatrachium dianae, it was found in the mountains of eastern Costa Rica Its ‘advertisement call’ consists of ‘a single tonal long metallic whistle-like note with a duration of 0.40-0.55 s…and a dominant frequency of 3.35-3.44 kHz’. This call is used to find a mate in the mountain forests. Continue reading for more pictures and information.

“Dr Kubicki said that the amphibian sounds more like an insect than a frog, which may explain how experts missed it during their extensive survey. The frog also measures just one inch (2.5cm) long, making it relatively difficult to spot among the foliage in the west forests and rainforests of the Caribbean foothills of Costa Rica where it was discovered at elevations of between 1,312 ft to 2,624 ft (400-800 m),” according to The Daily Mail.

Palm-Sized 300LM Mini CREE LED Flashlight Torch is Perfect for Emergencies, Can Be Picked Up for $3.88 Shipped