Many know that the Raspberry Pi 4 is a powerful mini computer that some have already turned into portable game consoles, but Experimental Pi’s PiBoy DMG is the first to offer a complete kit. In other words, you won’t have to fabricate anything yourself. You can either get a DIY base kit or a fully assembled version, complete with the Raspberry Pi 4. Read more for two hands-on videos and additional information.

It features a crisp 3.5” display with a resolution of 640 x 480, a Game Boy-inspired D-PAD, an analogue stick, six standard face buttons, an HDMI port, micro-USB, headphone jack, and a large 4,500mAh battery. The PiBoy DMG can emulate CPS, Dreamcast, Gameboy Advance, Nintendo 64, PSP, Neo Geo, Sega 32X, and lots more. You’ll be able to save / load states, speed up games, and install your own emulators. 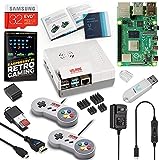