Red Bull’s MotoGP motorcycle boasts a 1,000cc V4 engine, capable of revving to 18,500rpm, produces 270 horsepower, mated to a 6-speed sequential transmission, all in a 346 lb (157kg) package. We won’t spoil the races, but let’s just say that they are a lot closer than you might expect, especially considering just how light the bike really is compared to the supercar. Then again, who can forget when the Bugatti Chiron was pit against a Red Bull F1 car? 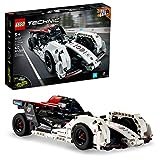