In the Halo universe, the Energy Sword is essentially a weapon that consists of a curved hilt that houses an energy storage module and a device for projecting the plasma, which forms the blade. Recreating this in real-life is not the easiest of tasks, but the team at Hacksmith Industries was up for the challenge. To start, they had to find the right nozzles and hoses to create the blade. Read more to see the entire build from start to finish and a bonus.

After the nozzles and hoses were selected, a fuel as well as oxygen manifold needed to be fabricated. In all, there are 2 input lines and 24 output lines to power all of the nozzles. A total of 140L of oxygen per minute is needed to run the Energy Sword, so they resorted to a tether, but the hardest task was yet to come…building the actual chassis to hold everything, along with a custom handle. Thankfully, a 3D printer was available and after some design work in Solidworks, the assembly went as smooth as possible. 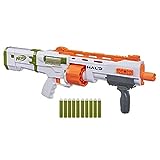