For those who want a 5G smartphone that doesn’t compromise on specs, but don’t want to shell out $999+, there’s the Realme X50 Pro. Featuring a 6.44-inch 90Hz Samsung AMOLED panel, up to 12GB of LPDDR5 RAM with 256GB of UFS 3.0 storage, a Qualcomm Snapdragon 865 processor, a dual front-facing, hole-punch cutout that houses 32MP / 8MP ultrawide sensors, and a quad rear camera setup consisting of a 64-megapixel Samsung GW1 chip with a f/1.8 aperture,an 8-megapixel ultra-wide camera, 12-megapixel telephoto shooter as well as a 2-megapixel f/2.4 monochromatic camera. Read more for a hands-on video and additional information.

If you’re a mobile photographer, you’ll have fun with “Nightscape 3.0” which comes with a “Tripod Mode” capable of super long exposure shots of up to 50 seconds, while the “Ultra Nightscape Mode” boosts the camera’s sensitivity to take bright images even in dark environments. It launches in April, priced at around $650 for the 8GB RAM + 128GB storage model, and $810 for the top-of-the-line 12GB of RAM + 256GB storage version. 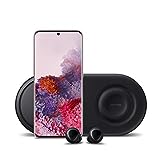