Ever wonder what would happen if you opened a soda that has been shaken a little too much at the bottom of the ocean? Well, Commander Chris Hadfield, a former Canadian astronaut who was the first Canadian to walk in space, shows you just that and explains the phenomenon. Put simply, carbonated drinks, like seltzer or soda pop, get their fizz from dissolved carbon dioxide. When these are opened, the liquid is exposed to pressure imbalance (i.e. pressure outside is lower than the pressure inside). If the can or bottle is shaken before opening, it will increase the pressure inside, which means the top is popped, an explosion ensues. Read more for the video he recorded a few years back and additional information.


When you’re situated beneath the ocean, the pressure outside is so high that it forces the bubbles back into the liquid, hence no explosion. And yes, one of these beverages opened at depth will stay carbonated longer too. In a nutshell, the higher the pressure, the less gas bubbles out and fizzes over the sides of the can when opened. The pressure at the bottom of the sea is so intense that no pressure is being released when the can is opened. 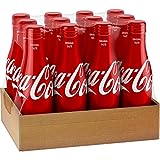