Engineer Shane Wighton has built a real-life aimbot in the form of an auto-aiming bow. One of the challenges was overcoming the fact that the arrow travels in a curved path through the air, which means that human archers must first visualize where a moving target will be before they fire. Another issue was the timing, since that also needs to be as accurate as possible for the arrow to actually strike the target. Read more for a video to see how everything came together.

Two robots – one attached to the bow, strapped to his forearm and a second in Wighton’s other hand when he draws the string – were needed to solve the arrow path as well as timing issues. Eight cameras are placed around the workshop to mark where the gray balls are in the space, allowing him to calculate where the bow is pointing, how far it is pulled back and where the target is in the room. 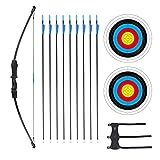