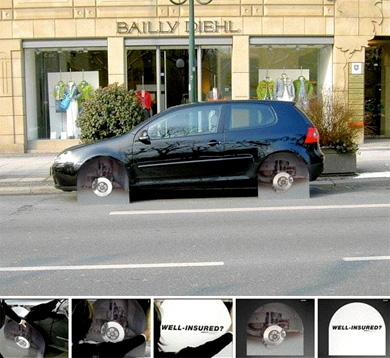 When do you know your car is safe? When you’ve got Well-Insured wheel covers, a shotgun turret, tesla coil alarm, and the Autoloc Flamethrower. Vote for your favorites.

These cardboard cutouts of empty wheel wells can be used to deter thieves who like cheap knockoffs.

Don’t think it would work? Ok, maybe not. But it would make for an amusing prank against a gullible friend. From a distance, it looks somewhat convincing.

This nifty air purifier by OKI supposedly “eradicate[s] all disgusting smells from you car” by releasing UV rays while producing ozone. It plugs right into your car’s cigarette lighter socket and has blinking LED lights to let you know its working. [Source] 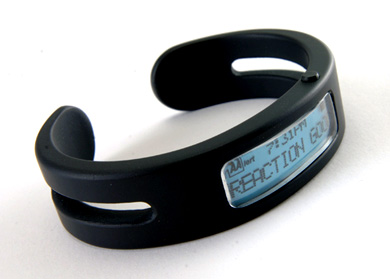 The Alert Driver wristband is a flexible rubber device that detects — by communicating with an RFID tag placed in the car — if a driver is suffering from fatigue, based on reaction time. If fatigue is detected, the device will start vibrating.

The device can be bent to fit your wrist, and has memory to stay in position, to ensure it will not fall off. 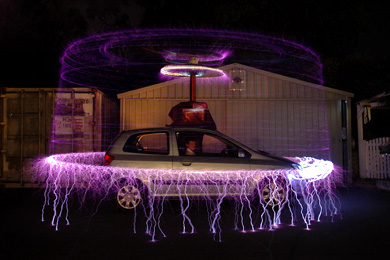 This could quite possibly be the “coolest security alarm ever” for your car. It basically consists of a giant Tesla Coil mounted atop the car’s roof, emitting an electrical forcefield to fend off would-be thieves. [Source] 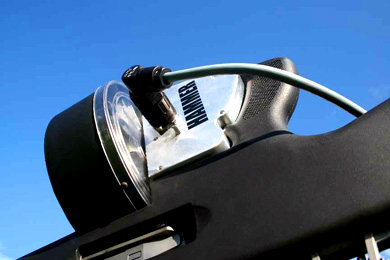 For a demonstration, the firm fitted a turret with two 12 gage shotguns to the roof of an SUV. Such a system could be used to breach a door or gate, expose a hidden device, destroy a roadside bomb, and more 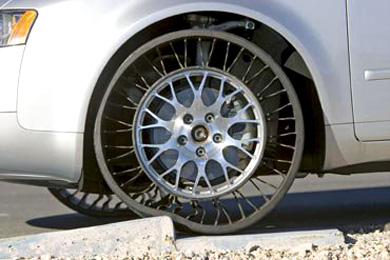 The Tweel sports a flexible spoke/wheel design that replaces the need for air pressure, deforming to absorb shocks. 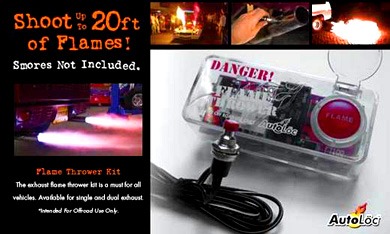 Shown at SEMA 2006, the Autoloc Car Flamethrower could be one of the most useful (coolest) auto accessories we’ve come across, enabling drivers to shoot up to 20ft. flames from their car’s exhaust. Product page here.

For “offroad use only.” Did you know that one of my pet peeves is tailgating? This could be far more persuasive than those Yosemite Sam “Back Off” mud flaps 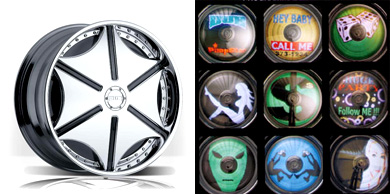 “The included software allows you to create your own images and send them to each wheel individually or all wheels at the same time as you drive! You can even pre-load up to six images into each wheel and program them to change automatically at the time intervals you select.”

This gadget/device was created specifically for 2006 Bullrun, a 3,000-mile road race, to prevent red light cameras from snapping pictures of the Lamborghini Gallardo’s license plate.

We fitted our Lamborghini Gallardo with this modification for the 2006 Bullrun. It’s an electrically charged plate blocker. Flip a switch and no photo radar or EZ-Pass camera can get you

A group of college students demonstrate a strange parallel parking device that attaches to your car’s rear bumper and “uses hydraulics to lift the rear end of the car — enabling it to slide sideways into the parking spot.” [Source]

Tinchilla Cools Your Beer in 60-Seconds Or Less