Photo credit: Sean Kornegay
Texas-based LIFT Aircraft, member of the Agility Prime “Air Race to Certification,” recently demonstrated their advances in electric vertical takeoff and landing flight (eVTOL) at Camp Mabry, August 20th. The Hexa aircraft boasts 18 independent rotors and can seat a single pilot. It has been designed for various purposes on a number of different terrains. It can even float on water by using its four buoys. Read more for a video and additional information.

You won’t need a pilot’s license, as it can be operated by just about anyone with the proper training, which mainly involves using a three-axis joystick. The technical work is handled by its triply redundant autopilot computer. So far, LIFT has conducted 600 test flights with a total of between 10-15 hours flight time. 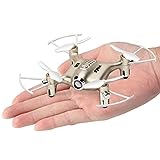 The thought of an electric vertical take-off and landing vehicle — a flying car — might seem straight out of a Hollywood movie, but by partnering today with stakeholders across industries and agencies, we can set up the United States for this aerospace phenomenon,” said Col. Nathan Diller, AFWERX director and Agility Prime lead.

NASA Spots Distant Galaxy That Looks Like a TIE Fighter