Digital Combat Simulator (DCS) is a free-to-play combat flight simulation game and some of its most hardcore fans probably have some pretty crazy setups, but probably none as detailed as this homemade A-10 Warthog. This project began as a somewhat basic four-screen gaming cockpit, mated to a Thrustmaster Warthog H.O.T.A.S flight stick. Then things got crazier, starting with physical instrument panels and eventually dedicated left as well as right side units.

The instrument panels are fully-functional and communicate with the PC running DCS over USB using either Arduino microprocessors or custom gaming interface boards. The Arduino microprocessors receive input from switches and control knobs, while also running 7-segment displays as well as servo-powered analog dials. Despite how complex it looks, the main instrument panel is essentially a standard monitor concealed with laser-cut MDF and Thrustmaster multi-function display bezels. 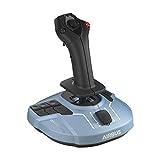