Touted as “the world’s first home and kitchen small appliance gadget that grants small and big kids alike permission to play with their food!” This device looks like a normal Belgian waffle maker at first, but once you cook up the batter, tiny edible LEGO bricks ensue. Its unique cooking plate is separated into smaller individual pieces that have studs on the bottom and indentations up top for easy interlocking. Read more for a video and information on how you can get one.

The bricks come cooked in single, double, and four stud pieces, which means you’ll be able to build a variety of edible creations while dreaming up your next meal, or where you’d rather be. Thankfully, the Kickstarter campaign has already reached its funding goal, and production is set to start later this year, with the first shipments beginning this August. More information here. 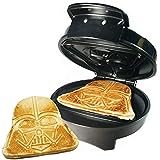 We’ve all heard that breakfast is the most important meal of the day. Well now it can be the most fun, too. With Building Brick Waffle Maker, build anything you can imagine…. And then devour it!,” according to its creators.

Don’t Pay $65, Get the NEOGEO Mini International Arcade Machine for $49.99 Shipped – Today Only