SpaceX founder Elon Musk recently conducted an interview where he talked about artificial intelligence (AI) and space travel, with the focus being on how soon we’ll see humans on the surface of Mars. He stated that he’ll be first sending on uncrewed mission on Starship to land on Mars within the next two years, since the Earth-Mars synchronization, or their relative orbits around the Sun, occurs every 26 months. Read more for two videos and additional information.

If the uncrewed mission is a success, Musk plans to send humans to the red planet by 2026. However, even before the human mission to Mars, Musk said that he will be traveling to space himself in two to three years. The manned mission may launch cargo as well as up to 100 people aboard a single Starship craft, which is currently preparing for a high-altitude flight test at SpaceX’s Texas development facility. 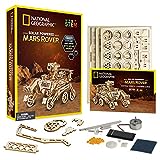