Wi-Fi router guards are now becoming a thing, but before you get one of these faraday cage-like accessories, read some of the reviews. Despite being able to block electromagnetic radiation and signals, installing one around your router would prevent its signal from transmitting as well, thus rendering your internet connection useless. Plus, several international studies have found no evidence that exposure to low level electromagnetic fields is harmful to human health. Read more to see a company trying to explain one of these “Wi-Fi Router Smart Guard” products.

If you’re wondering how a faraday cage works, it basically functions due to an external electrical field causing the electric charges within the cage’s conducting material to be distributed so that they cancel the field’s effect in its interior. This phenomenon is typically used to protect sensitive electronic equipment from external radio frequency interference (RFI) often during testing or alignment of the device. Other uses include shielding people and equipment from actual electric currents like lightning strikes and electrostatic discharges. 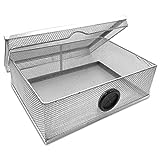