James J. Orgill of The Action Lab is no stranger to bizarre experiments, and this one involving magnetic ferrofluid and a superconductor ranks right up there. To start things off, he places a superconductor, which is most likely a metal alloy, down on the flat surface before placing a magnet above it, thus causing the object to both float as well as spin in place. After the magnet is set in place, ferrofluid is poured over it. Read more to see what happened next.

As you can see, the reaction looks like something straight from the latest Venom movie. This black shape-shifting globule appears to levitate above the superconductor. What exactly happens? Well, the superconductor captures the magnet within its own electromagnetic field, and when the ferrofluid is poured over the latter, a surfactant binds the two things together, while the magnetic attraction holds it in place. 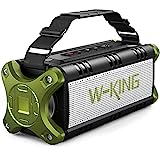