First, there was this life-sized Gundam in Yokohama, Japan. Now, Shanghai has gotten its own version that can be found at Mitsui Shopping Park’s LaLaport in the Pudong New Area. Standing 59-feet-tall, it was built to celebrate the launch of the Gundam Base gunpla store opening. The cornerstone-laying event was held on Monday, while the opening ceremony will be held on May 28 for the public as well as being live streamed on Bilibili. Read more for two videos and additional information.

Visitors to the new Gundam Base store on the fourth floor of the LaLaport shopping complex will be able to browse a wide selection Gundam products as well as take part in interactive events. The 55,000-square-meter LaLaport Shanghai Jinqiao mall is planned to be completely open by this fall, with approximately 180 shops, including Japanese restaurants, a movie theater and of course the first full-sized Gundam statue outside of Japan. 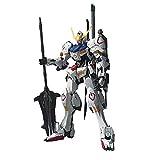