For most, this experiment is nothing new or special, but many don’t know that the iodine test is used to test for the presence of starch. It’s a simple, yet fascinating experiment, where starch turns into an intense “blue-black” color upon adding aqueous solutions of the triiodide anion, due to the formation of an intermolecular charge-transfer complex. Without the presence starch, the brown color of the aqueous solution remains. This interaction between starch and triiodide is also the basis for iodometry. Read more for the clip and additional information.

When iodine reacts with starch, it creates a striking purple/black colour change! 😲🧪 (@living_waters_science)


Starch is often used in chemistry as an indicator for redox titrations where triiodide is present. It forms a very dark blue-black complex with triiodide which can be made by mixing iodine with iodide (often from potassium iodide). The color of the starch complex is so intense that it can be detected visually when the concentration of the iodine is as low as 0.00002 M at 20 °C. 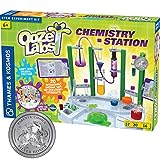