You’ve probably seen at least one replica vehicle from the Fast & Furious movie franchise, but what about twenty four of them in the same collection? Edmonton-based Jorge owns an auto shop somewhere in Alberta that contains movie accurate Fast & Furious replicas of the Toyota Supra, Nissan Skyline, Dodge Charger, Porsche 911 GT3 RS, and more. Even though some may look to be the actual vehicles they used in the films, they are all replicas, some modified from the ground up, while others already built. Read more for a video tour of the collection and additional information.

This kind of collection doesn’t come cheap, and Jorge managed to finance his collection by importing JDM vehicles to North America and selling them for a premium. To date, he’s resold at least ten Toyota Supra vehicles, and if you’re familiar with the scene, the A80 series command a hefty premium, especially the twin-turbocharged models. Other vehicles in this collection include Roman’s Mitsubishi Eclipse and the Nissan Skyline R33 / R34 cars. 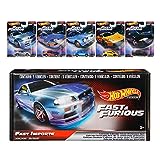