A human-made object has reached the space between the stars for the second time only in history. NASA’s Voyager 2 has exited the heliosphere – the protective bubble of particles and magnetic fields created by the Sun. Its twin, Voyager 1, crossed this boundary in 2012, but Voyager 2 has a working instrument that will provide first-of-its-kind observations of the nature of this gateway into interstellar space, which means its slightly more than 11 billion miles from Earth. Mission operators still can communicate with Voyager 2 as it enters this new phase of its journey, but the information it transmits – moving at the speed of light – takes about 16.5 hours to travel back to Earth – light traveling from the Sun takes eight minutes to reach our planet. Read more for another video and additional information.

The two Voyagers together will provide a detailed glimpse of how our heliosphere interacts with the constant interstellar wind flowing from beyond, complementing data from NASA’s Interstellar Boundary Explorer (IBEX), a mission that is remotely sensing that boundary. The space agency is also preparing an additional mission, Interstellar Mapping and Acceleration Probe (IMAP), that is to launch in 2024. 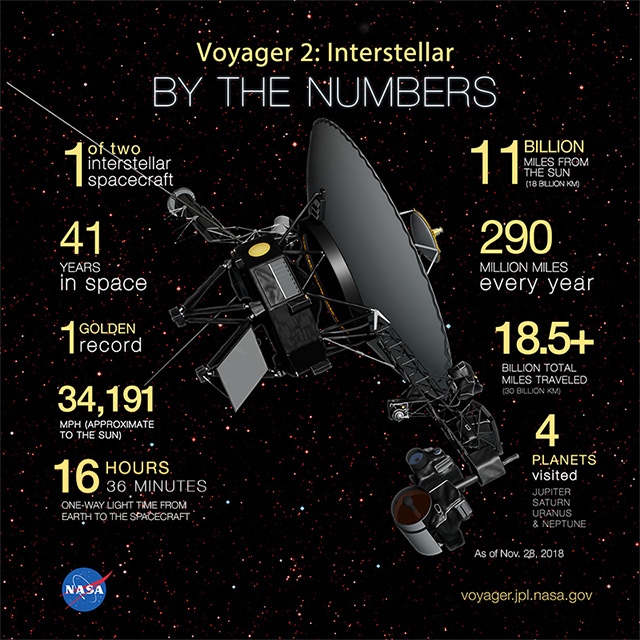 “Working on Voyager makes me feel like an explorer, because everything we’re seeing is new. Even though Voyager 1 crossed the heliopause in 2012, it did so at a different place and a different time, and without the PLS data. So we’re still seeing things that no one has seen before,” said John Richardson, principal investigator for the PLS instrument and a principal research scientist at the Massachusetts Institute of Technology in Cambridge.