Oculus founder Palmer Luckey’s new company, Anduril, has just debuted their AI-powered Ghost 4 military drone. It runs on the Lattice platform capable of handling complex missions and collecting all the data into an easy-to-view dashboard, enabling just one person to operate a swarm of drones. This artificial intelligence-based platform also lets it perform 32 trillion operations per second, making it 100 times faster than other drones currently on the market. Read more for two videos and additional information.

Ghost 4 is designed for several mission types, including aerial intelligence, surveillance / reconnaissance, cargo delivery, counter intrusion, signal intelligence and electronic warfare. Its modular, customizable design also means that you can pack it away in a backpack. When fully charged, you can expect up to 100-minutes of flight endurance and a top speed of 60 mph. 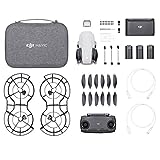 It can survive basically any environment. You could submerge it in up to a meter of water. You can salt spray this thing all day long and not have any problem. Ghost 3 had a transmission and a gearbox, like a drive. It had different blades, different heads. We’ve made all of the servo motors much quieter. We’ve made the blades themselves a much better aerodynamic design,” said Luckey.