Tony Hawk’s Pro Skater 1+2 remastered was released earlier this month, and to celebrate, “The Hacksmith” created self-kickflipping skateboard. First he took the Collector’s Edition skate deck and added electric motors, then he mapped a PlayStation DualShock 4 controller to it, which enables you to do kickflips and possibly more at the press of a button. Will this version ever get released to the public? Most likely not. Read more for the video and additional information.

Activision’s Tony Hawk’s Pro Skater 1 + 2 was developed by Vicarious Visions using Unreal Engine 4. This developer previously worked on ports for several Tony Hawk games, and for this one, they managed to obtain Neversoft’s original handling. The team also took a deep dive into the level geometry to make sure the player’s skating lines were the same from the original games. They remade all of the art assets for the game’s 19 levels to prepare it for 4K resolution but otherwise keep the game familiar to players. 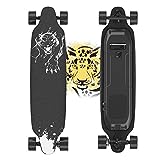 Vision 1789 Supercar Concept Looks to be Straight from Gran Turismo