Anthony Dickens’ Circle Guitar is an electric guitar unlike any other, thanks to its built-in mechanical step sequencer capable of generating sounds, textures and rhythms that would be impossible with a conventional instrument. Its central mechanism, the motor driven circle that strikes the strings, can hit speeds of up to 250BPM. However, to program the sequence requires placing five different color-coded of plectrum in any of its 128 holes. Read more for two videos and additional information.

The signal is captured with a hexaphonic pickup, and each individual string has its own output that can be amplified, recorded as well as processed. It also outputs a time code or syncs tempo via USB to the clock of any DAW (Digital Audio Workstation). Other features include an ash body, rosewood fretboard and laser-cut matte black acrylic covering the electronics. 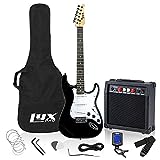 Occasionally you see or get to play something that makes you play and think about the way you play in a totally different way. This is ace, and the potential for creating new types of sound is endless. My playing in this doesn’t do it justice – I need to sit down for a while with it and get a hold on it – but I’ve put an order in for when they start to build them,” said Dickens.