“The Imperial March,” also known as Darth Vader’s Theme, was composed by John Williams for The Empire Strikes Back, and it premiered on April 29, 1980, three weeks before the opening of the film. Today, it’s still one of the best known symphonic movie themes, and over the years, fans have found unique ways to play this iconic tune, including with a toaster. That’s right, an engineer who runs the Device Orchestra channel managed to do just that, with the help of electric toothbrushes and a typewriter. Read more for the video and additional information.

Simply put as possible, he used a microcontroller and a rubber band to control the electromagnet inside the toaster to move the bread slot up or down. By just switching the magnetic field on / off at the frequency of each note, he was able to create up-and-down movements of which is then translated into the melody you hear. 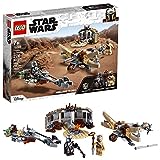