The Nintendo Switch can be used in docked or handheld mode, but sometimes, you want something a bit more unconventional. Gamer Michael Pick thought so at least, and that’s why he decided to build the world’s largest Nintendo Switch that actually works. First, he handcrafted the shell, buttons, and then 3D-printed mounts for the Joy-Con controllers. Yes, all of the giant buttons and triggers that you are fully functional. Read more for a video and additional information.

The Joy-Con in the 3D-printed mount is connected to servos that communicate with an Arduino microcontroller to ensure that all the buttons work properly. The completed game console has a 4K display and weighs in at a hefty 65-pounds, while measuring 30-inches tall as well as 70-inches wide. To be more specific, it’s 650% larger than a standard Nintendo Switch. 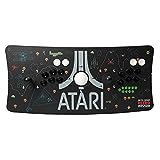