The Smarter Every Day team debuted their specialized cannon back in September, which was created to see how much faster it could propel a baseball than Aroldis Chapman and Jordan Hicks, who both hold the MLB record of 105.1 mph for fastest recorded pitch thrown. Let’s just say they managed to smash that record by hitting an eye-watering 1000mph with this cannon, and when a baseball propelled at that speed hits a metal barricade, it simply explodes. Read more to see what it would be like to catch one of these missiles.

Fortunately, they used a crash test dummy that was able to catch one of these baseballs standing, but in the end, was left was a gaping hole through the torso. As for the cannon, it’s comprised of a large pressure chamber and vacuum chamber combined with a plug and baseball separating the two. Its firing mechanism spans the entire length of the pressure chamber, exiting out the back where it’s secured by a large pneumatic sear mechanism. When the sear is released, the reaction between the two chambers sends high-pressure nitrogen into the vacuum chamber, forcing the ball forward. 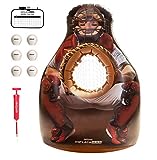