Photo credit: Retro Dodo
Anbernic’s RG280V is a great alternative for those who weren’t able to snag a Nintendo Game & Watch, which sold out in hours after going live last week. Why? Aside from being slightly more portable, this game console can not only play NES games, but titles from the SEGA Genesis, PlayStation, SNES, Neo Geo, N64, Game Gear, and more. It features a 2.8-inch IPS display, a dual-core 1.0GHZ JZ4770 CPU, of 512MB RAM, microSD card slot (256GB maximum) USB-C charging, a headphone jack, and a 2,100mAh battery good for 5-hours of continuous gameplay. Product page. Read more for two hands-on video reviews and additional information.

If you’re wondering how well it emulates these classic systems, it should have no problem with any games up to the PlayStation 1. In some early tests, Crash Bandicoot was found to run flawlessly, with no slowdown or glitching. The handheld runs the Open DinguX operating system, which can be confusing for those who aren’t familiar with it, but on the bright side, the user interface can easily be customized. However, the best thing about this is that it easily fits into just about any pocket for pick up and go gaming. 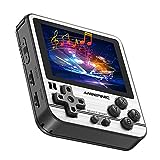