Google has teamed up with Universal Brand Development, Amblin Entertainment and Ludia to bring you 10 augmented reality dinosaurs from “Jurassic World”. When using Google Search, you’ll be able to watch T. Rex roam around your living room or watch the Stegosaurus graze in a field. To activate this feature, simply search for a dinosaur on Google using a mobile device and tap “View in 3D” to rotate or zoom in. Read more for a video demonstration and additional information.

After tapping “View in 3D,” users will then be able to bring the dinosaur into their space with AR and adjust its size to understand how large it actually is in relation to the things around you. If you’re on an Android device, turn up the volume to hear the booming footsteps and roars of each dinosaur. 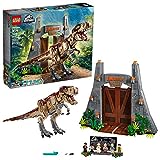 To create the 3D dinosaurs, our concept artists first did preliminary research to discover information about each creature. Not only did we draw research from various forms of literature, our artists also worked with paleontologists and the ‘Jurassic World’ team to make the assets as accurate and realistic as possible. Even the smallest of details, such as irregularities of skin color and patterns, are important,” said Camilo Sanin, Ludia’s Lead on Character Creations.