Hasbro’s Star Wars The Child Talking Plush Toy is a must have for fans of The Mandalorian, and you can get one for $18.74 after clipping the on-page $6.25 off coupon, today only, originally $24.99. He comes dressed in a little robe ever, complete with posable arms that let you pretend that the Force is within your reach. Simply squeeze the toy’s soft plush body to activate character sounds. Product page. Read more for a hands-on video review and additional information. 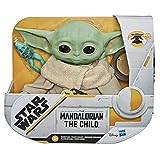 Hasbro authentically styled the toy after the pop culture phenomenon from the Disney Plus series, and it comes with accessories too, a little food dish as well as a blue toy frog to be more exact. Just how large is the toy? It measures 4 x 10 x 8.25 inches, just so you have somewhat of an idea before it arrives on your doorstep.