Before this mysterious floating hotel was abandoned in North Korea, it operated as the Four Seasons Barrier Reef Resort until 1989, when it was relocated to Ho Chi Minh City, Vietnam to be run as the Saigon Floating Hotel. It was anchored in the Saigon River, near the Tran Hung Dao Statue, between the years 1989-1997, informally called “The Floater”, a popular nightspot, but like all good things, it eventually met its demise due to financial issues. Read more to see how it became abandoned in North Korea as the Hotel Haegumgang.

Eventually, it was purchased by North Korea and taken to the Mount Kumgang Tourist Region. which opened in 1998 on the border between North and South Korea. These tours were indefinitely suspended in 2008 after an incident between a North Korean soldier and tourist arose. However, development was set to continue in 2018 after North Korea and South Korea announced to reopen the resort. This leads us to today, where work has been suspended due to the pandemic. 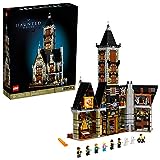 This is Not a Suitcase, Just a Powerful Triple Monitor Computer That Packs a Ryzen 5950X CPU and RTX 3080 GPU