Guitar Hero is a music rhythm video game that features a guitar-shaped controller, modeled after a miniature Gibson SG, used to simulate playing rock music. The player basically presses buttons on the guitar controller in time with musical notes that scroll on the game screen. Songs get harder to complete as you progress, with a few of them seemingly impossible, that is unless…you’re using Nick O’Hara’s Jon Bot Jovi. Read more to see this Guitar Hero robot in-action.

It’s powered by a Raspberry Pi 4 8GB computer running OpenCV-based code capable of identifying different colored blobs, while a PlayStation 2 outputs video to an HDMI capture card. An 8 channel driver board drive the solenoids, controlled by the Pi 4. The computer vision then isolates the notes and eliminates noise, enabling it to select which frets to hit as well as when to activate the strum trigger using the five solenoids arranged on the neck. In addition to the single solenoid on the trigger, a bank of relays is used for activation. 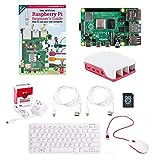