Let’s face it, there have been numerous toys over the years, but none have come close to recreating a Transformers robot seen in the films, that is unless…you’re talking about Letvision’s Letrons prototype. This Turkey-based startup has created a robot that looks like a standard BMW 3 Series coupe at first, but at the push of a button, it transforms into a giant robot. While humans can’t get behind the wheel, it’s controlled with a special remote. Read more for two videos and additional information.

When we first covered this robot, there was no price tag, but as of now, one of these will set you back a cool $600,000 USD. Why so expensive? Well, it takes a team of twelve engineers and four supporting technicians months to build just a single robot. The next upgrade to this machine would be to give it the ability to walk, or at least one reasonable funding is provided for new research and development. 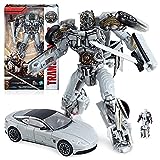 Don’t Pay $99, Get the LEGO Architecture London Skyline Collection for $31.99 Shipped – This Weekend Only