Here’s one collaboration we didn’t expect…a OnePlus Nord 2 x Pac-Man Edition smartphone. What this this apart from the company’s other handsets is its color, material, and finish (CMF), starting with a reimagined rear cover sporting a dual film design with phosphorescent ink applied to its innermost film, allowing it to glow in the dark. Plus, the device’s software experience has been gamified with games, challenges, and lots of exclusive (and hidden) content that needs to be unlocked. 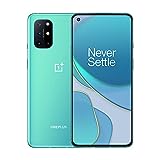