Photo credit: Heritage Auctions
Finding a sealed copy of Super Mario Bros. 3 for the NES is a feat in itself, and one graded Wata 9.2 A+ even less likely. This variant, with “Bros.” formatted to the left on the front of the box (on top of Mario’s glove), just might be the rarest of them all. That is why when one of them popped up on Heritage Auctions, collectors quickly bid up the price to over $100,000, and in the end, this pristine copy sold for a whopping $156,000. Read more for two videos and additional information.

During its launch, the game sold an incredible 250,000 copies in its first two days of release, and by 1993, the game had sold 7 million unbundled units in the United States alone. If you’ve never played this game, it’s also available on other Nintendo consoles. For example, it was included in the 1993 Super NES game Super Mario All-Stars, a compilation of remakes of NES Super Mario games featuring updated graphics and sound as well as on Game Boy Advance (Super Mario Advance 4: Super Mario Bros. 3).

For perspective, we have only offered one sealed Wata 9.0 A copy of this variant prior to this sale, and it sold for an all-in price of $38,400 in our July 2020 Signature Auction. This copy is about to drop some jaws! Previously unknown to the collecting community, and a high grade to boot. There are no significant marks that detract from its overall eye appeal. Please note, the scuffing around the “3” on the box is on the Wata blister inside the case and is not reflective of the actual condition of the game box or its seal,” said Heritage Auctions. 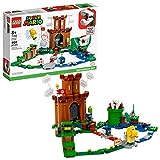