Azure cloud renders the visuals, enhances visual fidelity, and simulates real-world data / effects, as well as calculate physics, but when a user makes a typo when entering on an open world map (OpenStreetMap), this crazy building is the result. In any case, the game is stunning nonetheless, as the world Azure creates is populated with animals, vehicles, and even water that flows realistically based on wind direction. 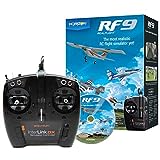