Photo credit: The Sun | AFP – Getty
Second Lieutenant Hubert Rochereau, who fought in a Dragoons cavalry regiment in World War I, perished in the village of Loker, Flanders, on April 26, 1918. His parents were so heartbroken that they blocked the entrance to his room so it would remain a pristine shrine to his memory. It was opened by the home’s new owners, who may one day turn it into a museum. Read more for a video tour and additional information.

The room still has a pistol, pipe and knives on Mr Rochereau’s window-facing desk alongside pictures of his family, while his military hat lays on the bed next to shelves of books discolored by the sun and military boots. The Second Lieutenant’s military jacket still hangs peacefully in the corner, with some parts devoured by moths. Hubert Rochereau, born in 1896, was given the croix de guerre after his death – a medal for courage in battle. 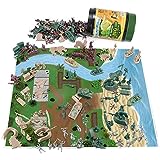