Photo credit: Daily Sabah
Star Wars fans already know that the Razor Crest was a gunship used by the Mandalorian bounty hunter Din Djarin, but prior to the rise of the Galactic Empire, it served as a military patrol craft. This famous gunship was used in the search for the child named Grogu, and continued to use it on the quest to find Grogu’s species in 9 ABY. Well, a fan of the series, Ayaal, and some friends, decided to create a life-sized replica of the ship. Read more for two videos and additional information.

Standing 13-feet tall, 46-feet long and 33-feet wide, it’s mainly constructed of fiberboard, metal and plastic foam. No detail was spared, as even the interior has been fully decorated, along with a lowering ramp and even a seat for Grogu. When all was said and done, it cost a total of around $10,268 USD. 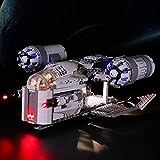 
WATCH: A fan of the “Star Wars” TV series “The Mandalorian” built a replica of the Razor Crest gunship in Russia. pic.twitter.com/tdGtlPl9rq

The ship weighs more than a ton. We were very much motivated to make it. As if we were inside the TV series and rebuilding the ship. This is the only such cosplay ship in the world. Honestly, I did not expect this to turn out so well. I see that there are lots of locals here, and most of them came to see the ship. That’s just fantastic!,” said its creators.