Virgin Galactic officially unveils the spacesuits its pilots will wear as they fly private astronauts on their journeys. It was designed in collaboration with Under Armour, and the Virgin Galactic Pilot Corps will wear the gear on future flights, which includes the first human spaceflight from New Mexico set to take place this month with the flight window opening on December 11. The design team started with a non-pressurized spacesuit design that aesthetically conveyed the pilots’ role in Virgin Galactic’s mission as well as practically supporting their unique task of flying regularly at over three times the speed of sound into space. Read more for a video, additional pictures and information.

The lightweight spacesuit weighs in at just 2.2-pounds and consists of flight-grade fabrics that ensure it is ultra durable, optimized for comfort in all stages of flight. These knitted fabrics, which form the spacesuit, also help regulate body temperature whether it be outside in the desert or during the various phases of flight. 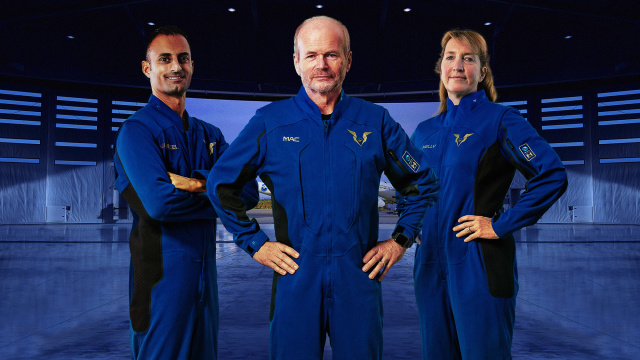 A pilot’s flight suit has been refined over the decades to embody a certain undeniable look and function, but they also have to perform beyond expectations. We took that as a starting point and built in all of the Under Armour solutions we’ve developed for comfort, support, movement and temperature management. Our goal was to build a suit that leaves a pilot – like any athlete – feeling confident and with zero distractions during a critical moment of performance. It’s been a fascinating journey,” said Randall Harward, Under Armour’s SVP of Material and Manufacturing Innovation.