Remember the 2 Fast 2 Furious bridge jump scene where Devon Aoki in her S2000 jumped over the South Miami Avenue Bridge, where South Miami Avenue crosses the Miami River between 3rd and 6th Streets? Well, one driver from Daytona Beach decided to try the stunt, albeit on a smaller scale, as they smashed through a traffic arm in front of the Main Street bridge Monday and crossed as the drawbridge was opening. Read more for the footage and additional information.

The traffic camera footage show the driver of a Hyundai Santa Fe SUV heading east toward the beachside, blowing through signals and the traffic arms that were in the down position. They managed to hit another traffic arm out of view of the camera, with both damaged along with the driver’s windshield. The vehicle continued over the bridge as it was going up, with all of its tires leaving the ground as it went over the gap. 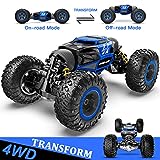 Saudi Arabia’s “The Line” Will be a 106-Mile-Long Futuristic Linear City, Here’s a First Look