H/t: Engadget
Nintendo’s Game Boy Advance hardware technically can’t play SEGA Genesis or Sony PlayStation games, but with the help of Raspberry Pi, this has now become a reality. Simply put, the mini computer runs software that streams games directly to a Game Boy Advance via its Link Port. Video / audio are then compressed and transmitted in real time to the handheld, while the latter responds with its current input, allowing to play games of any platform supported by RetroPie.

You won’t need the latest Raspberry Pi 4, just a Raspberry Pi 3, but unfortunately, you’re still limited to 1.6Mbps transfer for both upstream and downstream. This just means that you’ll have to lower the stream resolution to get a consistent frame rate without much slowdown. However, Crash Bandicoot and other titles do appear to be running quite well to say the least. 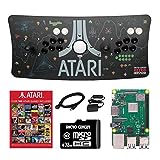 This is Not a UFO, Just the ZEVA N901ZX Electric Aircraft Capable of Hitting 160MPH