Microsoft may have delayed Halo Infinite, but that hasn’t stopped them from promoting the franchise, including their newest one with Pringles. The limited edition Pringles Wavy Moa Burger is available now exclusively at Walmart, and some fans have already rushed out to snag a tube. What is a “Moa Burger”? They are burgers made out of the flightless birds that call the Halo: Reach world home. and can also be found in wing as well as nugget forms. Read more for an early video review and additional information.

For those interested in the Moa, these large flightless bird-like creatures in Halo:Reach resemble the extinct Earth-based Moa. A Moa has two legs and two wings, with their body being covered with features, while scales cover them from the neck up, leading to a lizard-like head. They have a yellow colored eye which can be closed with an eyelid, with some sporting a purple head crest on their heads. 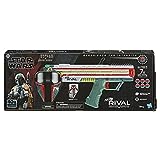 Through Pringles’ exclusive partnership with Halo, the new Moa Burger flavor brings to life the food from the Halo universe with an interstellar twist on the much-enjoyed, sometimes-ridden, and often misunderstood Moa bird,” said the company.