Before we dive into the build by none other than “The Hacksmith”, the term protosaber refers to an archaic lightsaber, or the the first known design of lightsabers. The main difference between the two is that the former’s hilt is connected via cable to an external power pack due to limitations in technology. Now for this build to work, he had to create a portable battery pack capable of powering the protosaber. Read more for the video and additional information.

As you might’ve guessed, he ran into several mishaps along the way, including the battery pack catching fire several times, but after replacing the protosaber’s blade with a thicker piece of tungsten, everything else went smoothly. While it may look dangerous, apparently just some safety glasses should do the trick, as The Hacksmith managed to demonstrate its capabilities without burning himself. 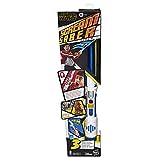