If you attended 2004 North American International Auto Show in Detroit, Michigan, the Ford Shelby Cobra concept car was one of the featured vehicles. Unfortunately, it never went into production. Inspired by the AC Cobra MkI, this vehicle was powered by an aluminum 6.4L V10 engine generating 645 hp and 501 lb-ft of torque, enabling it to hit a top speed of 207 miles per hour. Read more for two videos and additional information.

The chassis of the Shelby Cobra concept was based on an aluminum chassis that the Ford GT production car used, but modified to suit the concept car’s front-mid engine placement. Despite sharing many chassis similarities with the Ford GT, the Shelby Cobra concept is almost 2 feet shorter overall than the GT. Featuring a very minimalist look, which is continued in the interior, like the driver and passenger seats to being placed closer together due to the transmission placement. However, it did not have air conditioning or a radio. 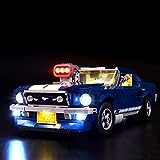