Standing 10-feet-tall and measuring 22-feet in length, this 76-million-year-old Gorgosaurus skeleton is headed to a Sotheby’s auction in New York. For those interested in seeing it in person ahead of the auction, you’ll be able to do so starting July 21st. This dinosaur’s name translates to ‘fierce’ or ‘terrifying’ lizard and it reigned during the Late Cretaceous period.

Gorgosaurus was native to what is now known as Western North America and was first discovered four-years ago in the Judith River Formation near Havre, Montana. What set this discovery apart from the others is the fact that Gorgosaurus is particuarly rare south of the Canadian border, with this one being one of the very few found in the United States. Don’t have the $5,000,000 – $8,000,000 USD it’s expected to fetch at auction? You could always build your own Jurassic Park with animatronic dinosaurs. 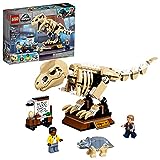 In my career, I have had the privilege of handling and selling many exceptional and unique objects, but few have the capacity to inspire wonder and capture imaginations quite like this unbelievable Gorgosaurus skeleton,” said Cassandra Hatton, Sotheby’s global head of science and popular culture to the Associated Press.