For those who don’t follow the racing world, the Bahrain Grand Prix is a Formula One Championship race that takes place at the Bahrain International Circuit. McLaren Principal Designer Esteban Palazzo recently took the McLaren Senna GTR to this circuit and explains why the vehicle has such a massive multi-tiered wing. Simply put, it creates 2,204 pounds of downforce and helps stabilize the vehicle, taking design cues from LMP1 cars. Read more for three videos and additional information.

The McLaren Senna GTR is limited to just 75-units worldwide, powered by a twin-turbocharged 4.0L V8 producing 813 horsepower and 590 lb-ft of torque. One other cool feature is its Drag Reduction System (DRS) in which the wing’s top flap slides down and onto the main wing when activated, this enabling air to flow more smoothly. 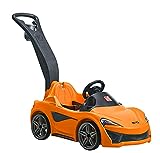 McLaren Tech Club is designed for those who want to delve deeper into the core of every McLaren car while also increasing their automotive knowledge. The new films explore the innovative technologies developed by McLaren designers and engineers to help deliver the incredible driving experiences for which the pioneering supercar company is renowned,” said McLaren.